Difference between revisions of "Flairs" 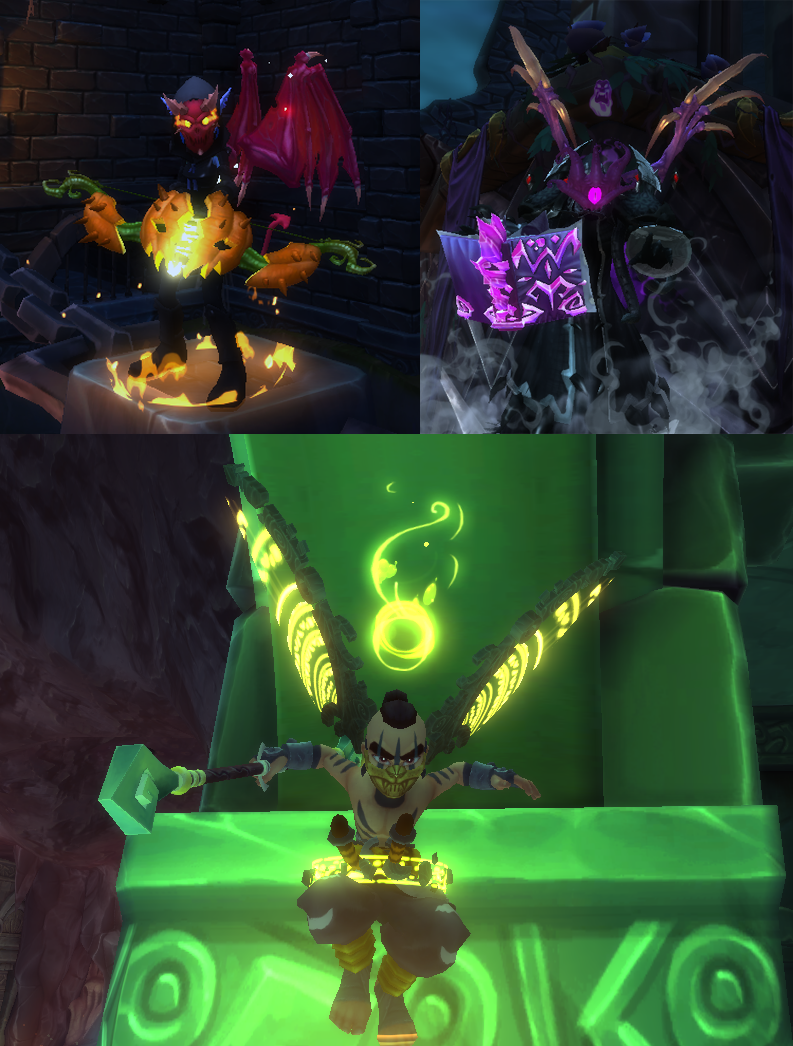 The examples of cosmetic customization abilities Flairs brings with costumes.

Flairs are accessory-like cosmetic items that makes your heroes look more legendary. They are meant to add more customization ability for the heroes aside from costume accessories and also to add some "flair" hence the name. They can only be equipped through the Hero Customization Manager which can be accessed through the cosmetic button in the player's inventory. Along with costumes, accessories and tower skins, they make up Dungeon Defenders II's cosmetic system.

The flairs system is divided into four categories : Head (halos, crowns, masks, mustaches and eyepatches), Back (wings, tendrils and backpacks), Waist (auras, tails and floating objects) and Feet (auras and other effects)

Currently there are no flairs available that can be directly purchased with gems, gold, or defender medals. Instead, the ways they can only be acquired are through defender packs, reaching a certain milestone in specific gamemodes, solving map secrets or obtaining codes from giveaways.

Certain limited seasonal flairs can be also be bought through DLCs during seasonal times.

While there are various different types of flair, certain flairs are made together to form a set giving a complete look. Two or four pieces of themed flairs usually makes a set. The sets will be provided as a set when obtained through defender packs, DLCs or a gamemode's milestone. (However, Mastery's sets are awarded separate pieces as its reward pool are tiered.)

There are currently 12 flair sets in the game:

Each Defender Pack will have a chance to give one of these flair pieces below. Some flairs will be given together as a set rather than individual pieces. They cannot be directly bought with gems, defender packs are the only way to acquire them in-game. However, they could also be obtained through codes acquired from various giveaways.

These flairs can only be acquired by reaching a certain point in various gamemodes (currently just Mastery and Onslaught). While the Mastery gamemode awards flairs piece by piece when a milestone is reached, the later stage of the Onslaught gamemode instead awards a set when a milestone is reached. Both gamemodes offers different flairs as they are meant to signify that the player has reached a certain point or completion of the gamemodes.

Limited Seasonal Offering flairs are used as initiatives or celebrations for certain events like seasonal. They will only be available for a limited-duration at a time, but they could be released again at a later date unlike unobtainable exclusives.

These flairs can only be obtained by participating in various community activities. Some of these flairs has a chance to be obtained (through codes) through watching Chromatic Weekend Wind Down's and The Caster's Guild's streams. Both provides different flairs. There is also a flair that can be obtained by testing content as part of the Remote Playtesting Group.

These flairs are currently unobtainable as they are specifically for exclusive events and players such as 2017 Ancient's Prelude's Prove Your Mastery Winners.